It is ironic to be a Philadelphia sports fan these days. The teams that we really don’t like—Andy Reid’s undefeated Kansas City Chiefs, the pennant-winning and National League East dominating Atlanta Braves, and especially, as of late, the Washington Redskins—have added another reason to the list of things we don’t like about them: they have disgustingly prejudicial names (and so do hundreds of others). It might be hard for a four-for-four Philadelphia sports fan to make an argument that the names need to be changed because you might think it’s my jealously talking. 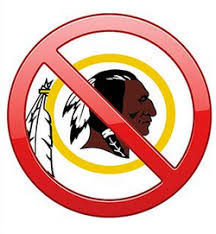 But to me it’s a no-brainer. American Indians are offended by the name (as an aside, I go with the Lakota activist Russell Means’ term “American Indian”). And there is a critical mass of them protesting the vile name. The National Congress of American Indians, too, has issued a statement against all of racist names that litter professional and college sports. The Oneida Indian Nation is protesting against the bigotry of the name in its Change The Mascot campaign. (Two D.C. sports radio stations have denied ads against the mascot placed by the Oneida Indian Nation, by the way.)

Of course, the National Football League is a business and Roger Goodell, the league’s commissioner, has made it a 24/7, 365 product.  From the combine, free agency, pre-season, the potential to extend the regular season by two games, and the draft—Americans can watch their favorite sport all year long and even during the boring stretches, it gets better ratings that live sporting events broadcasted by MLB, the NBA, and the NHL. America loves its football.

Add to the idea that the Washington Redskins are America’s most-storied teams, the fact that it’s the football team with the longest season-ticket waiting list in the NFL and worth the third-most, an astonishing $1.7 billion (right behind the Dallas Cowboys and the New England Patriots), and all of a sudden a blatantly offense name is now a subject of debate.

According to TMZ, Joe Theismann, a Washington quarterback for over ten years, with Super Bowl XVII under his belt, thinks the name is a tribute to American Indians (unable to name a specific tribe, or even the tribe of an Indian headdress that was gifted him).

And Goodell, a bottom-dollar capitalist, is flippant on the topic. In July, the NFL commissioner stated the following after ten member of Congress is May issues a letter to Godell and Dan Snyder, the owner of the Redskins:

For the team’s millions of fans and customers, who represent one of America’s most ethnically and geographically diverse fan bases, the name is a unifying force that stands for strength, courage, pride, and respect.

Snyder responded by saying, “We’ll never change the name… it’s that simple. NEVER—you can use caps.”

Of course, such statements receive backlash from many community members and advocates. Last week, Goodell acknowledged that fans

don’t want to change the name, but he longs to be “sensitive” to anyone that the Redskins or Washington is “insulting.”

Even the President weighed in on the debate (amid his myriad problem, Barry the Bomber can still talk sports). Obama said if he were the owner of team, he’d change the name. He’s speaking right to Snyder and Goodell on this one.

The debate rages on, but at the center of it, is tradition and money. Snyder doesn’t want to upset his fans, and Goodell is worried about ruining a profitable franchise. (On the other hand, Goodell’s notoriously violent sport is getting pressure from Congress to change some of its rules to lessen its brutality.)

It shouldn’t be a surprise though that, once again in American history, the pursuit of dominance and the narcissistic longing to maintain a history and erect monuments is done in face and against the American Indian. We all learned about manifest destiny, the Homestead Act, and European settlers and brutal Western expansion—the conviction from God to stretch U.S. land from “sea to shining sea.” Is this really any different?

For a nation that had colonels coining the phrase “nits make lice,” in order to justify slaughtering American Indian women and children, on that used smallpox blankets, and purposely wiped out the population of Buffalo in order to systemically destroy American Indians and their livelihood, it is not a surprise that the Redskins continue to profit on a racist legacy and nickname.

It’s clear to me that Christians need to stand against the Redskins and its evil name. We need to redeem our faith because it was in the name of Jesus and the spread of Christianity that the genocide against the American Indians occurred. But we are all God’s children and none of us need to be identified, stereotyped, or subjugated by the world’s arbitrary and modernistic categorization.  We need to realize that we are all one in the Kingdom of God and that our citizenship is first in that Kingdom. When we divide ourselves up by the world’s categories (that were made to enslave us!) we bend a knee to the powers that be. Our identity is as Jesus’ beloved, and other sociological categorizations are simply anti-Jesus. Though we need to be sensitive to the pain they’ve brought and work toward true understanding and reconciliation (like getting rid of the Redskins name), our work needs to be in ridding ourselves of them.

Dan Snyder needs to change his mind, Roger Goodell needs to pressure him to, and so do fans of Washington’s most-loved team.

5 Replies to “The NFL and its Manifest Destiny: on the Redskins and its racist name”