For me, the series finale of a TV show can be difficult. I tend to get pretty passionate about the shows that I watch and I end up gettingpretty emotional at the end of them. I just watched through all nine seasons of Seinfeld again, and at the end of the show, when Jerry, Elaine, Kramer, and George are in their prison cell and the camera backs away, I get a bit teary-eyed. Even during the clip show, when they start playing Green Day, I already miss the characters that I fell so deeply in love with. I was watching Father of the Bride on vacation the other week, and at the end, I’m watching Steve Martin recall the moments he experienced with his daughter who was getting married the next day, and I totally empathize with that kind of goodbye. I kind of hate that moment—I wish it could go on forever sometimes.

I’m not that good at saying goodbye, or adapting to change. I develop lots of anxiety about a transition and sometimes would prefer things to go unchanged. Sometimes I think that’s the safest thing, it’s the thing that will protect me most. If I don’t change the circumstances around me I can preserve everything as if we were in a time capsule.

But then I realize, the value that these things had was in the fact that they could easily change, they were finite, and they weren’t 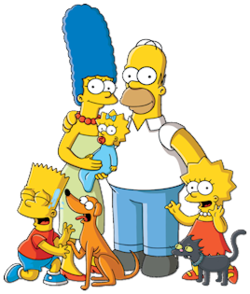 forever. I mean, even though I love the Simpsons, I just don’t see the same teary-eyed response when the show airs its finale in a few seasons. In fact, I haven’t really watched it since high school. I guess that’s what can happen when we fear change and things ending—they end up just dissolving into nothingness altogether. It’s better to experience a loss than it is to suffer disillusionment because we were afraid to let go.

We need to learn to move with the Wind of the Spirit, with what’s next, we can’t hold on to our traditions, ideas, and convictions so deeply we just become stale and unchangeable. Though we might never suffer loss because “we’ve never changed,” the world will certainly experience a loss as the Church remains increasingly irrelevant to it. And so, it’s our obligation then, to continue carrying the torch that Jesus gave us when he ascended into heaven; it’s our job to follow where he is leading us.

The entire point of the Resurrection is that the story isn’t over and we’re part of now. If that wasn’t the case, then truly, we could follow the Biblical teachings of Jesus and forget about life after his death. But there is life, life in Him, and in us. Even when Jesus dies, resurrects, and ascends, he declares someone else is coming to lead us into what’s next. He speaks of this in John 15 and then again in Acts 1.

We need to keep discerning what the Spirit is doing next. Central to that is holding on loosely. We aren’t trying to change the Gospel, but apply it to a new context. I’m committed to learning from all of those in the great cloud of witnesses, but I am also perfectly happy to be where I am today and feel like we have to keep doing something new in order for the Gospel to mean anything. This adaptability is hard, because we are indeed doing something great now, and that’s hard to let go of. But I’m afraid if we don’t let go soon enough, we’ll just fall into complete disillusionment and irrelevance. It’s better to change, do something new, than it is to cling onto to something that’s bound to die anyway. We need to keep adapting, not just to survive, which we will probably do for a long time anyway, but to thrive.

Those of us who do not continue to reinvent our faith are damned to lose it. I remember I had this very problem in high school, when I was “losing my faith,” and my friends were maintaining it, I really thought I was the outcast. But a decade later, or so, it’s ironic that their parents’ faith wasn’t enough, and they suffered a great loss and now live in some place of disenchantment. Their faith is as dated as their high school clothing is (ironically, I still wear my high school clothes, I think).

We need to hold on loosely and allow things to die that need to. Sometimes we just never let go of things that have gone well past their expiration date, and end up making ourselves sick. That’s why it’s good to ask tough questions like: Should this congregation close? Should we keep doing cells and public meetings? What does God have next for us? Is this model working? What’s going on? We really need to authentically ask these questions and come up with new ideas all of the time.

We should constantly be wondering what’s next and take our role seriously in God’s mission and the revelation of the Holy Spirit. I think we should hold onto to things loosely, because a tight grip may not leave enough room for the Spirit. And we might just become a stale cartoon at the end of it.

Part of the problem with listening to what the Spirit is doing is a fear of trying new things and unique things. Following the Spirit and succeeding aren’t the same thing. I’m convinced that God could be calling us to do something, we could fail, and we can try something else. We might need to ask how specific God is and what obedience actually means

So we’re going to try things out that fulfill that mission and we might fail. Does that make us bad or failures? No! It just makes us human; which is all we need to be to even be qualified to follow Jesus.

We might be cursed to think that if we don’t succeed at what we think God has called us to do, we are failures and on top of that disobedient. And so the consequence of that is that we either stop being ambitious and just hunker down and keep what we have, or we don’t honestly evaluate how we’ve done and we don’t dare to improve. It’s a major problem in the church, if you ask me. So let’s agree to go with the Spirit and be O.K. accepting failure.

One of the reasons that we are doing this together is that God reveals what’s next in many different respects and we need to pay attention to them. The Holy Spirit’s voice comes like a whisper, and it may come in many different ways. In 1 Kings, Elijah is up against some ferocious enemies—he literally declares that he is the only one left following God and it’s hard to hear God when we are that lonely. Here’s the scene with which you might be familiar:

And the word of the Lord came to him: “What are you doing here, Elijah?”

10 He replied, “I have been very zealous for the Lord God Almighty. The Israelites have rejected your covenant,torn down your altars, and put your prophets to death with the sword. I am the only one left, and now they are trying to kill me too.”

11 The Lord said, “Go out and stand on the mountain in the presence of the Lord, for the Lord is about to pass by.”

The wind of the Spirit, in such a loud environment, is hard to catch. We need to quiet our souls and listen intently. Listen to people’s stories, listen the Scripture, pray and listen to the Spirit, discern in your environment, particularly the creation around you.

Read the Scriptures with an inquisitive and open mind—one ready to see someone new in them that we haven’t seen. It doesn’t need to be the age-old interpretation for it to mean something. God reveals new things to us all of the time.

Listen to your friends and community and what they are saying. Don’t declare you know what God has for you or for anyone else without talking about it. We discern things in community because all of have God in us, and so our dialogue together, helps us see that. Must it be consensus-driven? No! Elijah is standing up to the prophets of Baal trying to continue on with God’s mission, but if we think we’re a prophet, that’ll take some discernment too.

Develop an interior life that’s deep enough that you can hear God’s voice amid all of the noise of the city; sometimes we need to go and be with Creation to listen clearly to God and mute everything else that’s happening. Try some spiritual listening sometime. Try to listen to yourself or have a trusted intimate help you with these—go through these questions: “Who am I?” “Where have I come from?” “Where am I going?” “What is prayer?” “Who is God for me?” “How does God speak o me?” “Where do I belong?” “How can I be of service?” “How is your prayer life?” “How are you making space in your life for God to speak?” Hear what you are saying and try to discern the Spirit.

One Reply to “Changing before it’s too late -OR- Does anyone still watch the Simpsons?”